In light of recent events, I decided to dedicate this What I ate Wednesday to my pup. After all, he’s ingested more interesting stuff than I have this week. Except maybe that delicious antipasto at Coco Pazzo, or the leftover roasted beet salad and quinoa from my Sunday post. Oh, and snickerdoodle dip. But more on that later.

I used to think Mondays were rough. Coming off a relaxing weekend away or at home to the impending workweek ahead. Trading the freedom of leisurely activities for cost centers, conference calls and a cold commute. But as much as I think we have a hard time transitioning into Mondays, I’d imagine our pets have it even worse. Unless you have a cat then they are just excited to get you out of the house.

5-plus walks and 3 park visits per day. Ok, this is cool! A spontaneous car ride to visit Nana and Papooch where I can eat acorns and meaty things and run in the backyard until I puke? Don’t mind if I do! Weekends are AWESOME!

But then Monday hits. And just as you come back from your early morning walk and finish your continental breakfast, suddenly you’re faced with the dreaded baby gate of doom which can only mean one thing: She’s leaving.

Ok don’t panic, Finn. Let’s evaluate the situation. She’s not going to that ‘Jim’ she talks about because she’s clearly not wearing stretchy pants. Is it time to eat again? Darn, she’s just refilling that round thing that holds my water. Oh yes! Here comes that soft and fluffy pad I sleep on in my crate. It’s so cozy I could just lay down right…no Finn! Focus! Oh look! Toys! She’s throwing all of my favorite toys in the kitchen. Not anorexic big bird. I love anorexic big bird!

It’s official. She’s going to work and she won’t be back for a very long time.

Stupid bird. quit looking at me. You’re no fun. You don’t even squeak. Silly pillow. You’re not THAT soft. Oh great, I’m out of water. What the heck do I do now? Where the heck is my mom? I’m annoyed. What can I do to show her how bored I am? She likes to cook. I know that. Sometimes she uses those paper things on the shelf. Maybe if I chew off this outside cover thing she’ll get the hint. After all, I do love the taste of paper.

It’s probably my own fault that this behavior transitioned into Tuesday as well. After all, I had a work function and a social event Monday night so I warned Finn it would be a long day. I think my exact words were ‘Look, I know it’s Monday and this one is going to be tough, but I promise to make it up to you.’ We tried to squeeze in as much play time as possible in the time I was home but it just wasn’t enough.

So as I open the door Tuesday afternoon I was greeted with another surprise.

You know that rug I pulled a string out of yesterday, lady? Yeah, well that was your warning. And you left it out for me anyways. Silly Mom. And since the cookbooks didn’t do the trick either, I chewed that rug to pieces just about 10 minutes before you got here. I notice how meticulously you put it back in place every time I move it. Maybe you’ll get the hint now? PS you know it was time for a new one anyway. 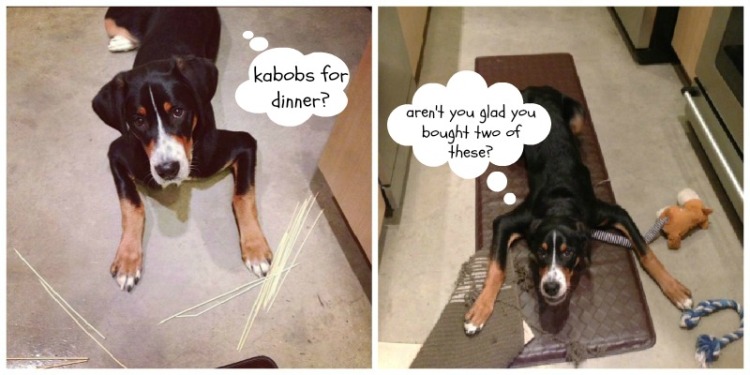 Guilty as charged, Finn. After cleaning up mess #2 for the week, I bundled myself in as many layers as possible (sub-zero temps have joined us again here in Chicago) and spent the next few hours walking, playing, standing in the dog park so Finn could let out some of the energy he was obviously storing up this week. And when we were too cold to play outside anymore, we headed home and played some more.

So what does a guilty mom give her puppy after a few ‘alternative meals’ the past few days? Dessert of course! As I pulled out a jar of peanut butter I was reminded of a recipe I made a few months back. And so we cooked. (NOTE: no cross-contamination of dog peanut butter vs. human peanut butter occurred during the making of this recipe)

I kept stumbling upon the same recipe on Pinterest. Over and over a photo of something called ‘Cookie Dough Dip’ kept popping up and sparking my interest. First and foremost I love cookie dough. I’ve always been one more in favor to eat the dough than the cookies themselves and this recipe was egg-less so you don’t get that weird taste in your mouth afterwards. Shout out to my Aunt Barb who let my cousins and I make a batch of cookie dough and (gasp) just eat the dough on our visit to California several years back.

So I finally got around to actually clicking on the recipe and was even more intrigued to read that the main ingredient was, wait for it…chickpeas. Say what? No chance this tastes like cookie dough. I had to attempt it. And while it tasted a little more like chocolate chip peanut butter cookie dough, it was good. Too good.

Several spoonfuls later, I decided to try an alternative version from the same web site. This time Snickerdoodle. Same basic ingredients with the addition of cinnamon and substitution of chocolate chips. Once again, too good! 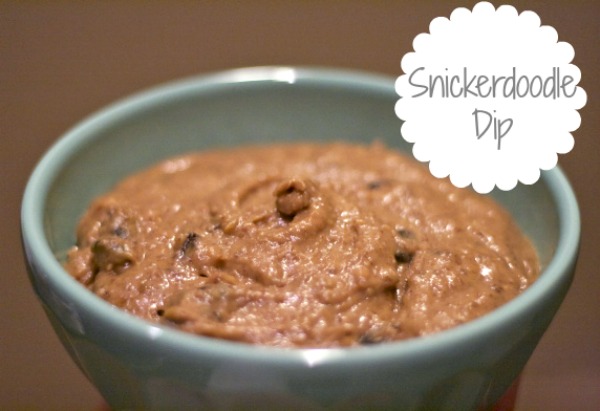 In a colander, drain and rinse beans. Add all ingredients to your food processor and blend until smooth. Add raisins if you like them. I happen to love them. So much so that I should rename the blog simply raisins. Raisins rule.

Trust me on this one. I know it sounds weird, but this stuff tastes like cookie dough. Grab a spoon and dig in!

Prefer the original? Try both versions from Chocolate Covered Katie.

The good news is it’s Wednesday. And we have just a few short days before more walks and a long vacation with Nana and Papooch. I haven’t told Finn yet but I’m hoping that keeps him from destroying anything else. At least until Monday.

2 thoughts on “What Finn Ate Wednesday”