Remember when I used to post recipes? You know, actual recipes of real food. Between the juicing and the travel, I’ve been on a bit of a cooking hiatus. And I’ve been informed as of late that not everyone is a fan of my juice cleanse posts. So fortunately for all of you the cleanse is over and I actually cooked this week.

We had a few birthdays to celebrate this June so after a few scheduling attempts, my girlfriends and I were able to get together for a casual summer dinner last night. Even Ella joined in on the celebration.

But before I get into the recipe details let’s catch up on the other excitement happening this week. In case you’ve been living under a rock (or don’t live in Chicago) you might not have heard that the Blackhawks won their second Stanley Cup in 3 years on Monday night and the city has been buzzing with excitement ever since. And seeing as how I live down the street from the United Center, I did what only felt natural after the final horn blared, I banged my new cast iron skillet while standing on my balcony and then dragged my boyfriend (half-shaven playoff beard and all) outside to join the celebration. Because that’s just what you do when a team wins a championship. You take it to the streets!

As you can see from my photos the West Loop got crazy. Not really. This was the extent of it. It was nothing like the madness that would soon occur in Wrigleyville but fun nonetheless. The biggest problem cops in our neighborhood ran into was people standing on top of the planters in the middle of the road to get a shot of the crowd. Not that I did that or anything. You can also see from the photo how thrilled Matt was to have accompanied me down to the festivities. Perhaps stopping him in the midst of shaving the playoff beard had something to do with it. Or the cast iron skillet banging. Whatever the case he was a good sport and he’ll thank me for it later in life. Or in another life. At some point he’ll thank me.

Tuesday was just your average workday until one of my co-workers nonchalantly mentioned that the cup was downstairs in my building. Say what? A couple of higher-ups brought it to an event down at Phil Stefani’s and word spread fast. Mostly by me. Just minutes before I had mentioned to my sister that me sending her the cup-tracker google map link did not mean I was stalking it like a Bieber fan, but rather that I thought the feature was cool. I believe my exact words were, ‘Besides, it’s not like it would ever come here’. 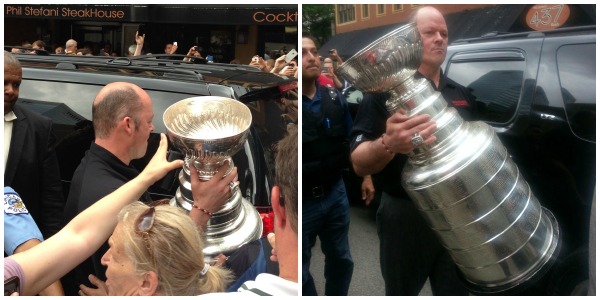 photo on the left is mine, right courtesy of Tim Kline

And whaddya know, it did.

All of the cup excitement rubbed off on Finn too as he decided to 1) obstruct my only method of spying on him throughout the day and then 2) throw a party. Kids these days.

We have a little break in the excitement before the big parade tomorrow so it left just enough time for our birthday dinner. Since we were having the dinner over at one of the guest of honor’s condo, I wanted to make something easy to transport and light for the summer. So naturally, I made a 8+ layer trifle, stopping halfway up because I was only feeding 4 people. Ha.

In a medium bowl, whisk water and sweetened condensed milk until combined. Add pudding mix and stir for another minute or so. Let mixture set for 1-2 minutes. . Fold in cool whip. Now you’re ready to layer. 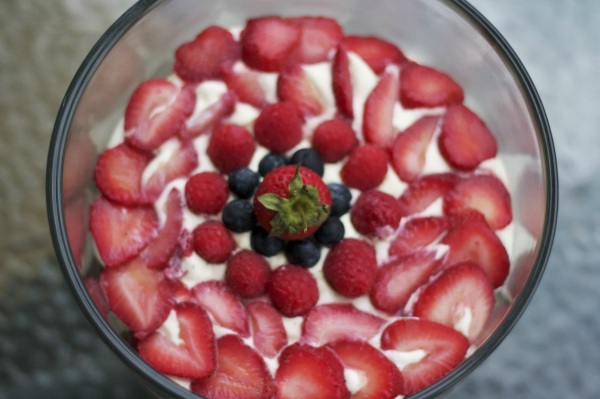 Start with a layer of cake and then alternate blueberries, pudding and sliced strawberries. Repeat until you reach desired height, run out of ingredients, or just become disgusted at just how large that trifle dish is. Top layer should be an attempt at a pretty pattern of strawberries and blueberries. 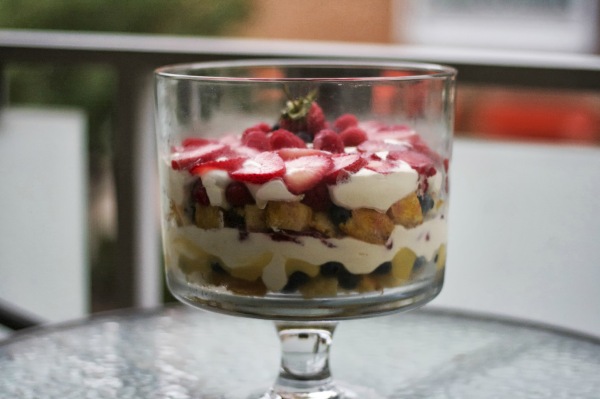 Don’t worry it never looks as good as the pictures predict it will. Cover and refrigerate for at least an hour. I did mine the night before and just took it out to bring it to room temp before serving.

Prefer the original? get the full recipe from Skinnytaste.com

It just so happens that this triple berry trifle would be a great addition to an upcoming 4th of July BBQ. Get it? Because it has red, white and blue berries? Trust me I didn’t plan it this way. Lord knows I don’t typically get around to posting a 4th of July recipe til at least Labor Day. But hey, sometimes things just work out.