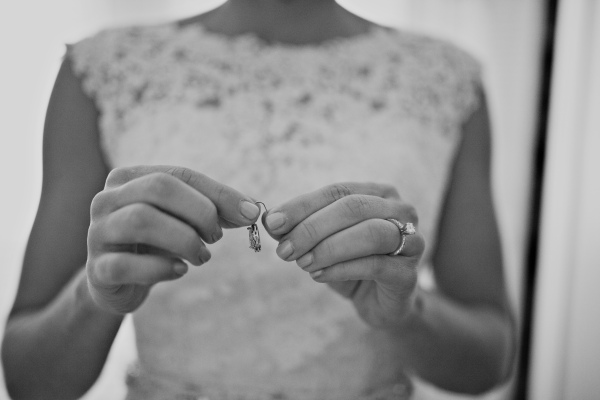 There’s just something in the details. Don’t get me wrong, you may not get the same emotion with a detail shot as you do with a candid, but I love the way that the details give you a feel for the entire day. As if the theme (if there is one) is all wrapped up into a pretty little detailed package.

So without further ado, here are some details from our wedding day taken by the talented Wright Photographs out of Champaign. 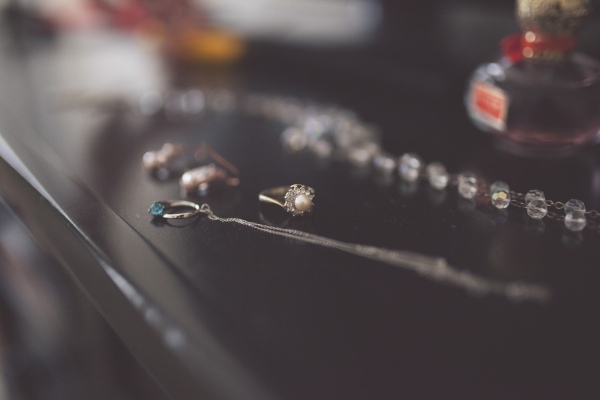 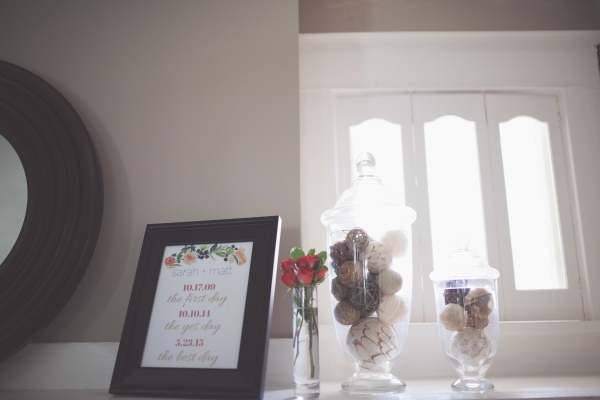 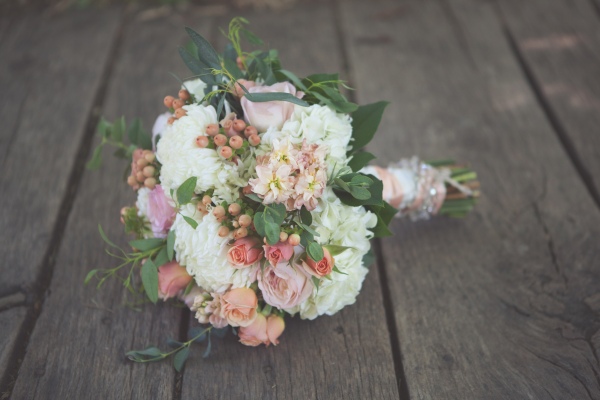 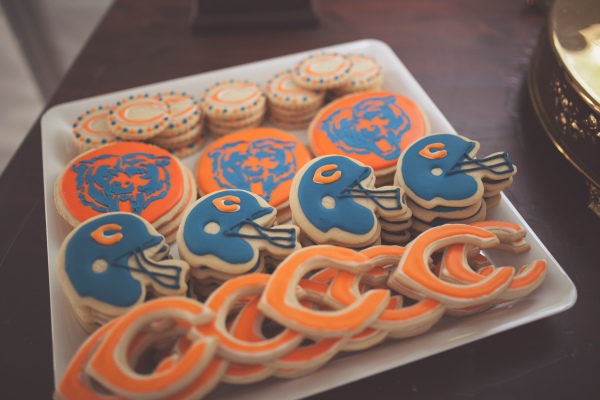 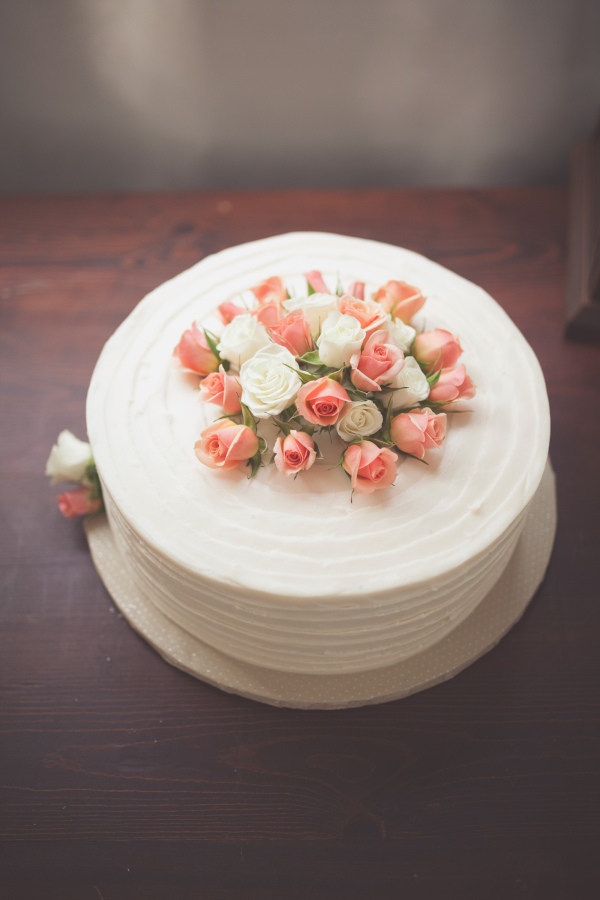 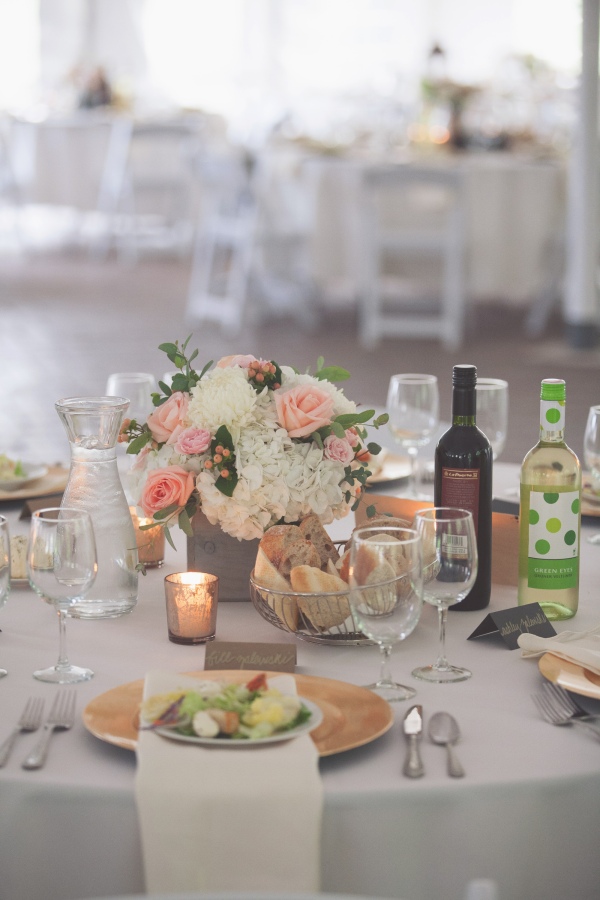 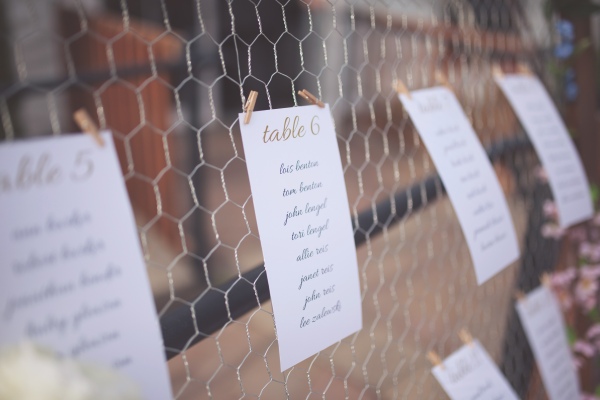 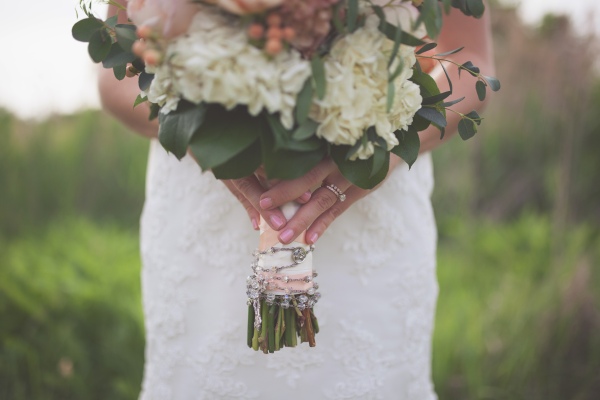 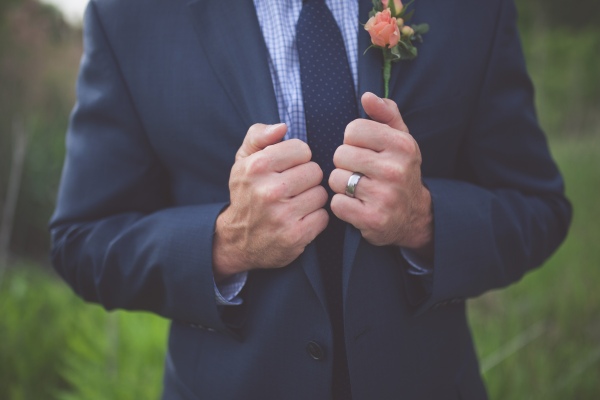 I’m in my southern character today, accent and all, in an attempt to escape the cold spell we’re about to get hit with again. I don’t know about you but I’m over the snow. Fortunately, I’m at the tail-end of a rare four-day weekend, so I can’t let another mini polar vortex ruin my day-off spirit.

Speaking of snowflakes, this weekend we celebrated the first birthday of yet another one of my best friend’s daughters with a winter ‘one’derland theme. 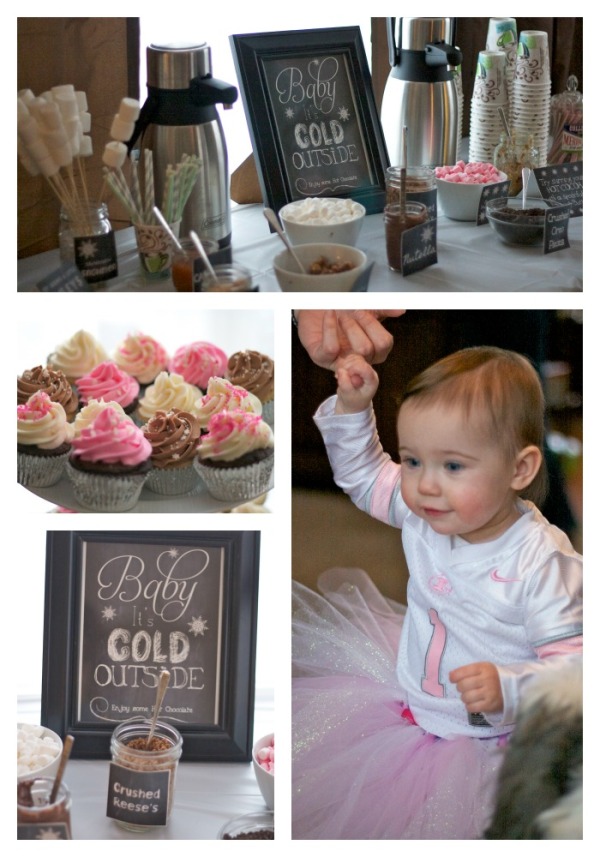 If you were reading along last year, we threw a series of baby showers for an influx of little girls coming our way throughout the winter season. Four to be exact. It’s hard to believe they are all turning one already. If you mommas are reading this, you might want to consider another theme for year two as each party has been accompanied by LOTS of snowflakes, both inside and out.

My girlfriend went all out with this theme so Grayson could celebrate her first birthday with 60 of her closest friends and family. Little lady is barely one and she already has a higher attendance record than I do. Both my friend and her husband come from large families so shoe counts like this are not uncommon.

In reference to the photo above, you are in fact seeing double. Grayson’s cousins are twins, 16 months old and lightning fast. I was just happy to get them both in the frame.

I think it’s safe to say Grayson had a great time at her party. According to her mother she had so much fun that she decided to wake up every 3 hours later that night to see if anyone still wanted to celebrate.

i had a little free time on Friday so I made a batch of snowflake sugar cookies. Completely unnecessary as my friend had plenty of sweets, but they fit in nonetheless.

I’m off to get a few more things done before the snow starts again. Have a great week!

I bet you’re expecting a post about my weekend spent surfing the beaches of California. Or better yet that I caught a big one off the coast of Hawaii and followed it with a delicious dinner of fresh sushi and a fire dance. And perhaps if you strictly based your assumption on my title you could be right. But alas, I’m simply referring to the theme that accompanied my nephew Owen’s 7th birthday party this weekend in sunny yet not exactly coastal Springfield.

After a casual 4th of July in the city, I traveled down to Springfield on Friday to spend some time with family and celebrate one of many July birthdays. Per usual, Finn slept the entire way. Adjusting positions from this:

Saturday morning I ran what felt like the entire city of Springfield only to come up short on my 12-miler. Bah humbug. I eventually gave up and settled for breakfast and the farmer’s market with my mom. Fortunately that makes up for it every time.

Then it was back home to prep the backyard for the Water World trilogy that would be our afternoon. The snow cone station was set up. 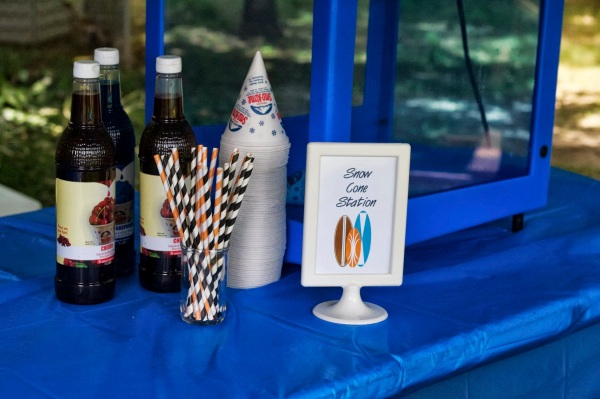 The cupcakes were topped.

And the equipment was tested for water levels and gliding efficiency. 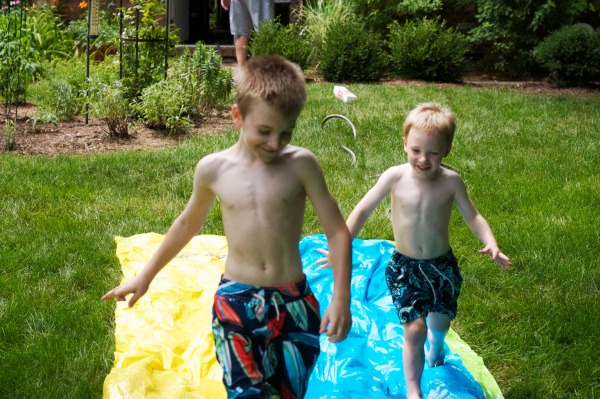 We had a few minutes to kill before the chaos began so I forced Owen to freeze next to the chalk drawing his mom made. It’s moments like this I can’t believe how grown up he looks.

And then he gives me a shot like this and I realize he’s still a kid. Whew!

And then the boys arrived. 6-10 7 year-old boys. I couldn’t keep count. There were water balloons bursting, snow cones crushing and war screams for the next two hours.

We realized quickly that when it comes to boys, there is no easing into a party. No shy introductions to one another and baby steps towards the water slides. As soon as those kids rounded the corner of the house, the shoes came off, the bags went flying and the airstrike began. I didn’t even try to get any still shots until the 1,000th water balloon was popped. And that only took 25 minutes. You can watch my Instagram video or catch another snippet of the action below.

Now you wish you took a nap before that party too, don’t you?

Here are a few stats from the party: 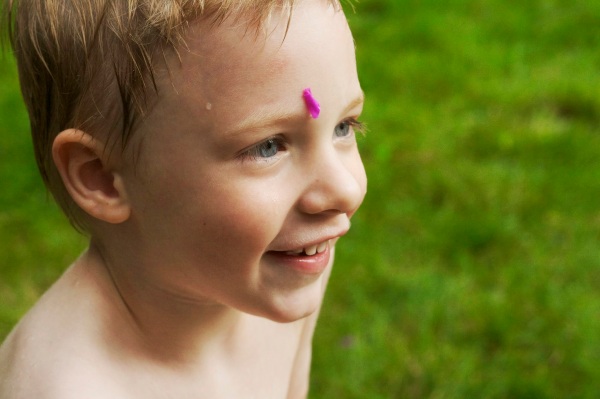 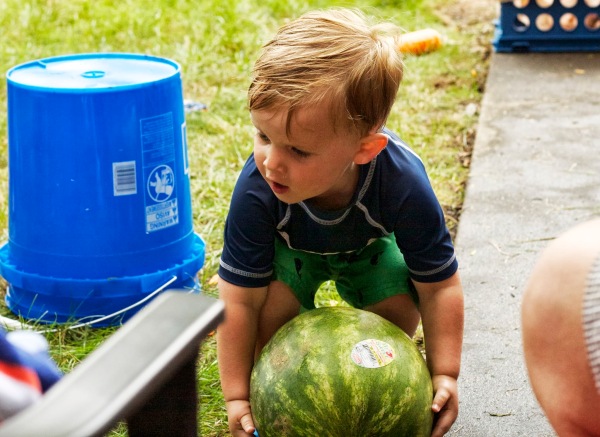 It’s weekends like this that I feel fortunate to have family and friends close enough to visit often. Sometimes the drive to and from Chicago can be monotonous, but being able to experience these milestones first-hand makes the hours spent in the car worth it. Hours that I mostly fill documenting the various positions in which my puppy sleeps.

must. touch. all. seats.

Speaking of puppies, my Finn joins Owen as he celebrates his 1st (7th) birthday tomorrow. Owen was pretty excited to hear that Finn will no longer be “zero years old” and that they will be the same age for a while. Gotta love dog years.

p.s. where did my puppy go?

I hope you are able to ease off the holiday weekend and have a wonderful week. I’d love to hear how you celebrated. Share your comments below. I dare ya.

What’s your favorite 4th of July food? –watermelon for me

Which firework is your favorite?– I like the ones that turn into crazy bugs at the end.

Did you have a water-slide party growing up? –sure did. And it’s still among my top 3 parties of all time. Clown cupcakes and all.

I love parties. And I especially love all of the details that come with them. The joy you get when you open the invitation and get a small glimpse into what the party may or may not be like, the colors, the theme!

NOTE: If you don’t geek out on stuff like this then you may want to stop reading now because it only gets nerdier from here…

If you’re anything like me you love browsing invitation books and web sites for design ideas. And you might be my long-lost twin if like me, you hate the overhead that comes with them. $47 for 15 cards that I then have to buy stamps for and send on my own? And don’t even get me started on square vs. rectangular postage restrictions! Oh the post office sorter machine isn’t set for square envelopes? Well, that would have been good to know a month ago. Oh, an extra $25 in postage will fix that? Ok then. Or how about the design factor? I like that design but I really like this one too. Can’t I just have them mate and mail out their offspring? 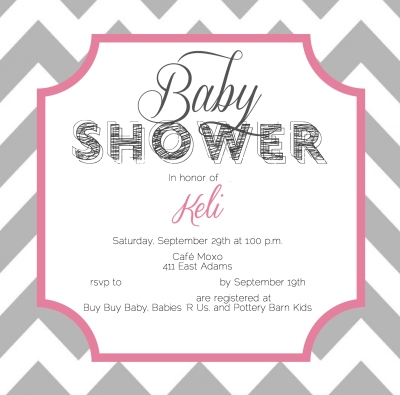 Each time I’m faced with getting invites out for a party or event, I always question whether others will appreciate the effort that goes into receiving a mailed invitation. But then there’s that little voice inside of me that chimes in,

‘But it’s a printed invitation Sarah. Something tangible. Something that might brighten their day amongst the junk mail. Remember the joy Sarah, Remember!’

Damn you heart, you win again.

The purpose of this post is to let you know you don’t have to settle for big box invitations. Although I do think that companies like Tinyprints, Target, Shutterfly and the like have wonderful options, many of which I’ve used in the past, these are also great resources for finding a starting point for your own custom invitations. You know, so you avoid situations like the time you showed up to the prom in the same dress as a freshman…not that that ever happened to me or anything.

And I’ll also tell you that you don’t have to know a lot about design or have fancy software to get started. While photo editing software like Photoshop can help and InDesign is great for laying out pieces, I have laid out a number of invitations in Microsoft Publisher, mostly for its compatibility and quick edits if you are working on it for a friend or client. There are also a few free software options out there if you’re in a pinch and don’t want to spend the money on the real thing. Gimp is a good substitute for Photoshop and Scribus for InDesign. 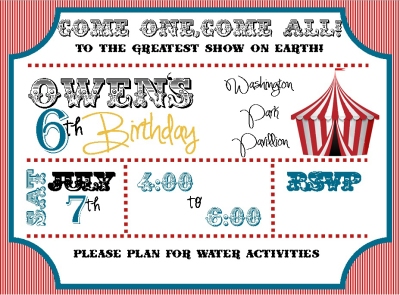 While the party theme doesn’t necessarily have to match the invite, I like to pull elements from the piece (color palette, background pattern, font types) and bring them in throughout the party to tie it all together. From signage to food and candy, it’s an easy way to bring the theme through to the actual day.

Now that I see a sample of all of the invites from last year, I realize I have some retroactive posts to write. From baby showers to birthday parties, it was a year filled with joyous celebrations and I feel very lucky to have been a part of each and every one.

Have a great week!

Last month we celebrated my dad’s 60th birthday with a golf-themed surprise party. After a long and hot day of golf (how appropriate), Dad came home to a house full of friends and family all there to celebrate 60 great years. From invites to desserts and decorations, my mom, sister and I really took the theme to the extreme. Take a look below. I highly recommend this theme for your next party if you have a golfer in the family!

My sister sent me an invitation to my nephew’s 4th birthday party this week and it got me thinking about invites. In today’s digital age, it seems that printed invites are becoming obsolete. Yet, like the hand-written thank-you card, they are meaningful. I absolutely love opening them and hanging it on my fridge in the weeks leading up to the event. I look forward to receiving invites like this every year because my sister, like myself, takes a theme and runs with it. I love the idea of still sending printed invitations. But just in case you prefer the E-vite, here’s two options from a few neat vendors.