Well lookie there. Another month or so has gone by and I’ve left you all alone, uninspired and wondering if I’ll ever get back a normal blogging schedule again.

I had a Memorial Day post planned for you but then I forgot to take a picture of my triple berry crumble with the topping on it.

So all of a sudden, a delicious last-minute BBQ dessert became a topless triple berry something or other.

And since I’m not sure how WordPress handles nudity, I just decided against posting it all together.

But seeing as how holidays seem to inspire me to write blog posts more than any other time lately, I figured I’d be remiss if I didn’t at least show you part of the journey that was a pretty tasty triple berry crumble.

Provided my blog platform doesn’t block the photos for their content, of course.

In a large mixing bowl, toss berries with the sugar, flour and cinnamon. Place in a prepared pie plate.

In a separate bowl, combine the oats, flour, brown and white sugar and salt. Use a pastry blender, a fork, or your hands to cut butter until crumbly. Sprinkle evenly over the berries.

Place the pie plate on a baking sheet. Bake in the center of the oven until the fruit is bubbling and the topping is golden brown, about 1 hour.

Remove the crumble to a rack to cool slightly. Tasty on it’s own but you can also serve it with whipped or ice cream.

There’s something about a patriotic holiday that inspires me to throw fruit and crust together last-minute and see what comes out. Take, for example, last year’s 4th of July when a late afternoon pop-up shower sent us back home from the neighborhood pool just in time to play iron chef with the ingredients in my fridge in an effort to bake something red, white and blue.

No party to attend, only two people to serve and a limited amount of pie crust, but a patriotic pie nonetheless. 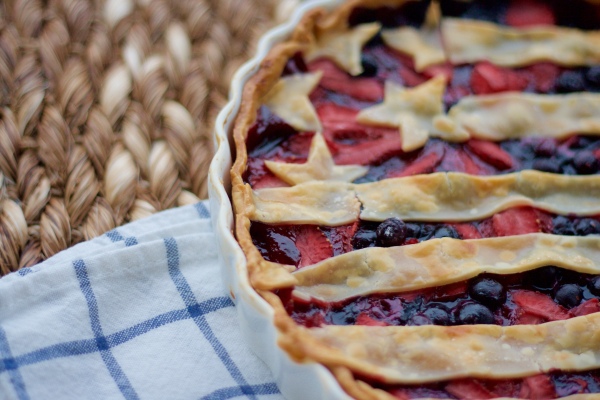 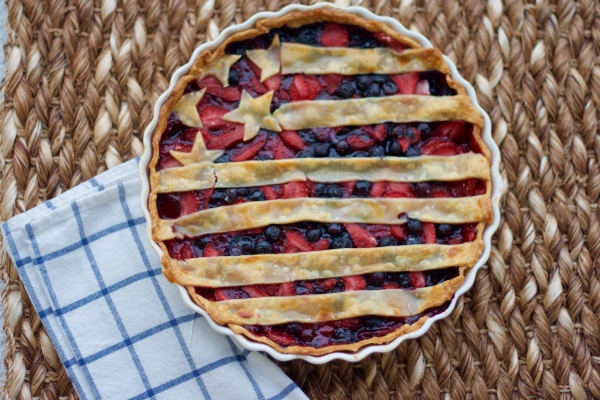 So what’s on tap for this year? I’m thinking of really going outside the box and revisiting a trusty Triple Berry Trifle.

Three cheers for fruit that matches the colors of our flag.